As part of the 2019 Festival, the Mathematical Sciences Research Institute (opens new window) (MSRI) will host the Make or Take Spiral, featuring outposts of local and national math organizations and clubs offering take-home and online resources, as well as hands-on activities. 2019 Festival presenter Dr. Scott Kim of Math Monday shared the following guest post with us about playing math games with the children in your life!

Choosing the right math games for your child

As a child, I loved reading books of mathematical puzzles. I wasn’t very good at solving them — that came later — but I enjoyed peeking into the creative questions that mathematicians asked, and the ingenious ways they solved them. That experience gave me a big head start on school mathematics, and led to a lifelong love of math.

As an adult, I want to give all kids a chance to enjoy the playful side of math, and discover their own individual connection to mathematics. So, for the last few years I have been bringing math games into my local elementary school every Monday at lunchtime and inviting kids of all ages to come play. I’m happy to say that Math Monday has grown into a school institution that continues to be run by parent volunteers.

To help you started choosing math games for your family, here are some of the most popular from Math Monday. These games are widely available, easy to learn, fun for kids and adults to play together, feature math prominently, and can be replayed again and again. All of these games have physical pieces (except Sudoku, which uses paper and pencil), and are accessible to young kids. All of these games are widely available, so try out a few, and see which games capture your fancy. 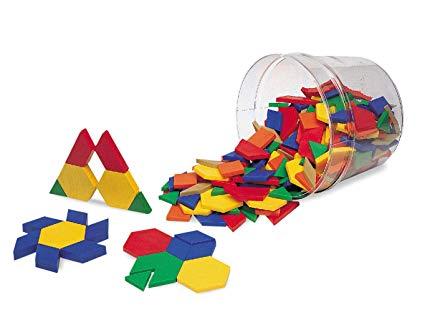 When my friend Rebecca Ifland started homeschooling her kids, she asked me for advice, knowing that I loved math. I recommended that she get buckets of pattern blocks — small geometric blocks that fit together to make colorful patterns. She went out and got them, and pattern blocks became an important part of all eight of her children’s upbringing. She found that pattern blocks are just as captivating for young kids as they are for older kids, and lead to endless creativity.

Pattern blocks are common in kindergarten and lower elementary classrooms, where teachers use them to teach concepts of shape, pattern and fractions. They are available through teacher supply stores like Lakeshore Learning. Consider visiting a teacher supply store when you are shopping for kid’s toys — classroom supplies tend to be durable, versatile, and inexpensive.

Read here (opens new window) about the myriad activities you can play with Pattern Blocks. 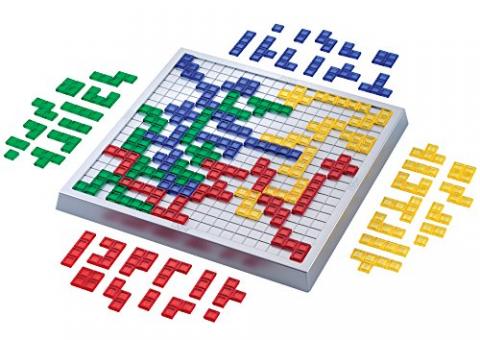 Studies show that kids with strong spatial thinking skills (like the ability to rotate shapes in their imagination) tend to do better in math later in life. In fact, spatial thinking tests are better predictors of math performance than math tests. And one of the best spatial thinking games is the popular family board game Blokus.

In Blokus, four players place pieces on a board corner to control space and block other players from spreading their color. Every piece is a different shape, so players must visualize where pieces can fit. Blokus also comes in smaller two-player version, and a triangular three-player version. Like Tetris, Blokus fills your imagination with colorful shapes that fit together, and trains you to look for patterns in the world.

Read here (opens new window) about the history of Blokus, and tips and tricks for playing better. 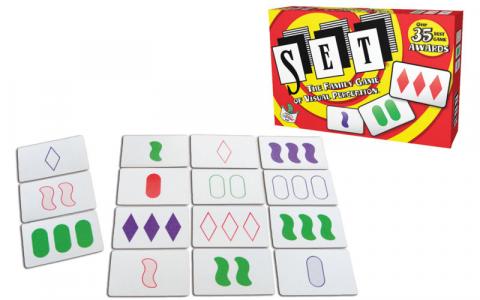 You might think that an abstract card game based on set theory would have narrow appeal, but this colorful family game has become a mainstream hit, available in all toy stores. There is also a junior version of the game, appropriate for kids as young as 3.

Everyone plays simultaneously. Look for sets of three cards that match a uniquely tricky rule. Young kids pick up the rule quickly, and can often beat their parents. At Math Monday, Set always attracts a dedicated group of players, who keep bringing in new players to play this wildly engaging game.

Since it exploded into worldwide popularity in 2004, Sudoku has taken a permanent position beside crossword puzzles as a staple in newspapers and magazines. Although it uses numbers, Sudoku is really a game of logic — the numbers could just as well be letter or other symbols. The goal is to write a number in every empty space in the grid, so that every row, every column, and every outlined box, contains one of each number from 1 to 9 (or in general from 1 up to the size of the grid). Every number can be deduced through pure logic, without ever having to resort to guessing.

Bookstores dedicate entire shelves to paper and pencil Sudoku puzzles. The most common form features a 9 by 9 grid, which takes quite a while to solve. For beginners and kids, I recommend starting with smaller 4 by 4, 5 by 5 or 6 by 6 grids, which take only a few minutes to complete, and still pose hefty reasoning challenges. Have kids start with small puzzles, and gradually work their way up to larger puzzles. Solving Sudoku puzzles develops focus, persistence, and confidence in one’s ability to overcome chaos with logic.

Sudoku is just one of literally hundreds of similar visual logic puzzles that are particularly popular in Japan. KenKen, the most popular Sudoku alternative in America, was invented by a Japanese math teacher who wanted to give his students practice doing mental arithmetic. You can get free weekly KenKen puzzles by subscribing at kenkenpuzzle.com (opens new window). 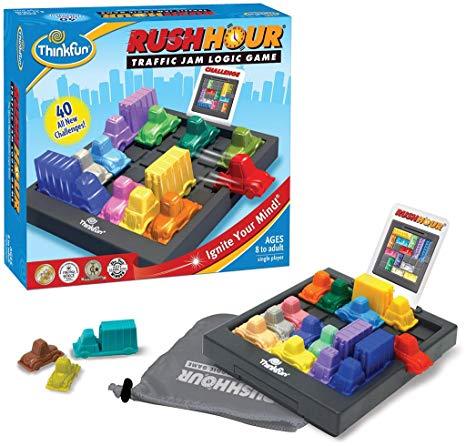 Mathematics is more than just numbers. At its heart, mathematics is about solving hard problems that demand precise reasoning. All mathematicians learn to break complex problems into simpler problems, and to switch strategies until they find a method that works — all useful life skills.

One of the most irresistible problem solving challenges is the puzzle toy Rush Hour. Each Rush Hour puzzle features an arrangement of cars and trucks jammed into a crowded parking lot. Your goal is to get the red car out a slot in the edge by moving other cars out of the way first — very much like the shuttling problems that real parking attendants face when the lot is crowded. Sliding cars around is fun for your hands, and the deck of forty progressively more difficult puzzle cards does a great job of gradually leading you into harder and harder challenges.

Rush Hour is available in a Junior version with easier puzzles, as well as an app that tracks your moves. Other puzzle games like Gravity Maze and Penguins on Ice, from publishers ThinkFun (opens new window) (a 2019 Festival presenter) and SmartGames (opens new window) all feature a deck of progressively more difficult spatial logic puzzles. 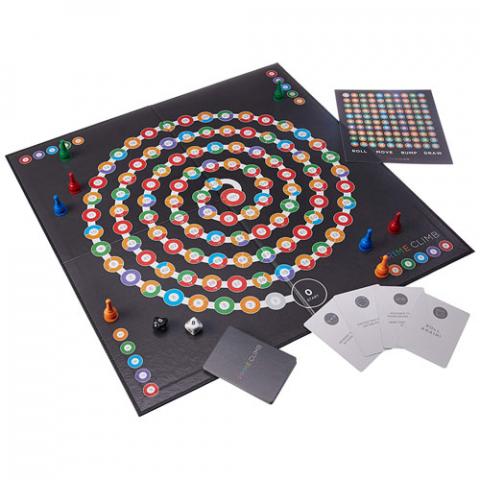 Prime Climb (opens new window) is a beautifully produced board game first launched on Kickstarter in 2014. Its colorful but sophisticated design makes it equally attractive to adults and kids. It is one of the most consistently popular games at Math Monday, and even appeals to younger kids who don’t yet know how to multiply — they play it with just addition and subtraction.

At its core Prime Climb is a race along a number line — roll dice, then move your pieces (each team gets two pieces) along a sequence of spaces numbered 1 to 101. As in all such games, kids get valuable practice with addition, by counting up or down from the number they are on.

From that basic premise, Prime Climb adds four twists that add depth to both the gameplay and the mathematics:

Prime factorization is an important idea that is difficult for most kids to grasp; Prime Climb makes it fun.

Read here (opens new window) about the history of Prime Climb, the math behind the game, and some Prime Climb puzzles originally published in the New York Times.

Tips for getting the most value out of math games

I hope I’ve whetted your appetite for math games. For reviews of other mathematical games, and for more information about bringing math games into your school, check out our site mathmonday.net (opens new window). And visit our booth in the Make or Take Spiral at the 2019 National Math Festival!

Puzzles are to math what stories are to language, says noted puzzle designer, author, and mathematical artist Dr. Scott Kim. His first book, Inversions, introduced the world to ambigrams — words written symmetrically so they read upside down. His mathematical art appears in many math textbooks. His puzzles have appeared in numerous magazines, including Scientific American and Discover, and computer games such as Tetris and Bejeweled. He now designs educational games for abcmouse.com.